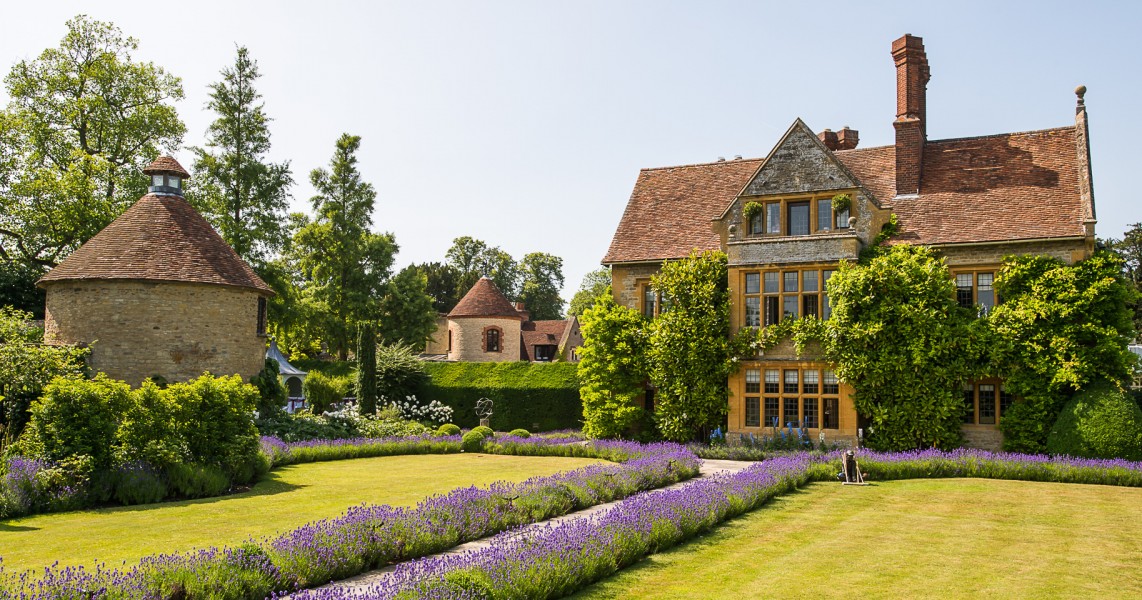 It’s hard to know where to start when speaking about Le Manoir: do you begin by talking about the beauty of the setting, the mellow Cotswold stone building with it’s exquisitely appointed rooms, the extensive grounds where you can wander from manicured lawns to Japanese water gardens, finding assorted statuary dotted in wood and field or do you start with the food.

For it is with food that Raymond Blanc began. He stepped up from his job as waiter to cook when the chef in the place he was working was off sick and  a legend was born. Soon RB became a household name as the food coming from his first restaurant in Oxford, also called Les Quat’ Saisons was an overnight success.

The move to Great Milton in 1984 allowed for a charming restaurant with rooms and this has now evolved into the extraordinary place that the Belmond Le Manoir aux Quat” Saisons, to give it it’s full title, is today. Part restaurant, part luxury hotel, part cookery school, part sanctuary and part laboratory for RB’s latest love : the science of food. And before this Indian summer broke and autumn arrived with it’s chill winds and lashing rain I went to spend a night. Let me say at the outset that I was Raymond’s guest. I have known him for many many years and whilst we are not close friends we can claim to be good acquaintances. It was my wedding anniversary and so a night away from home seemed a perfect way to celebrate.

It was the fact that I was going as a celebration that worried me most, place such as Le Manoir are celebration destinations and I was dreading that awful “Valentine’s Day” phenomenon, couples seated across the table from each other, decked out in their finery, faces set with a steely determination to enjoy their treat. I dread hushed dinning rooms, waiters that glide unheard to your table to fill your wine glass, replenish your water, give you bread, take the bread away……. It’s all too much I just want a nice meal and to be left alone to enjoy it. That said you do need staff with savvy, they must be able to look around the room and notice if you want something, with the very best staff noticing a second or two before you do, that you want something.I imagined whispered conversations in the bar, worried faces surveying the wine lists, and a general air of pilgrimage and wonder, nothing could had been further from the reality. Le Manoir, for all it’s immaculate service, and there was not one member of staff that didn’t wish us Happy Anniversary, is a very relaxed place to stay. It positively encourages you to exhale, leave the world outside the beautiful wrought iron gates and have a good time.

We stayed in the Arabesque suite, big enough for many a pirouette, it was set across the courtyard from the main house and had a charming view of the rooftops. I was deeply charmed by the view of the assorted chocolates, sugared almonds and fresh fruit left for us in the room and like a child went round pressing buttons, checking cupboards and giving little squeals of delight when I found something wondrous. Our bathroom boasted a huge shower, his and hers basins and a mirrored bath, indeed the whole room was mirrored with floor lights the came on when you walked in. Of course it was over the top, glitzy and bold, but how wonderful to feel like Jean Harlow as I lay in the bath full of bubbles watching the TV on the wall. Two small caveats: the edge of the bath is a good 20cm across and there is a definite moment of jeopardy when you climb out and of preference I would have preferred it to have been my 25 year old body that was reflected in all those mirrors rather than the one I have these days.

When you spend only one night in a smart hotel it is tricky to find time to fit all the experiences in so there was no lazing in the bath, gardens had to be explored, walks taken, champagne drunk. And we did all those things, the lake and ponds add a fairy tale element, the Japanese Tea House tells of RB’s long love affair with all things Nippon, the kitchen garden is , as one would  expect, rich and burgeoning with many different areas and a magnificent greenhouse where RB grows the plants with which he hopes to change the way we use sugars, a passion of his. So gardens done, no time for Boule or Croquet it was onto the champagne before a change for dinner and a cocktail. No wonder then that later that evening I had great difficulty working the complex mood lighting switches in our room.

Many, if not most people, chose one of the set menus for either lunch or dinner but I am an old hand at this eating out at Michelin starred restaurants malarky , so we chose from the a la carte menu. You will always be offered a little something with your cocktail, a pre starer and often another appetiser and trencher person though i am I find two courses plenty.

A word about the sommelier. The wine list at Le Manoir is exceptional and very scary, not knowing what to choose I settled on some New Zealand Pinot Noir. I know I like them and the price was not steep enough to ruin my husbands anniversary good humour. When I spoke to the sommelier about my choice he asked if I would mind him making a suggestion. His suggestion was a bottle of an Austrian Red wine of exceptional quality and deliciousness, at the right price for us and it was a wine I’d never have found.

I ate wild mushroom risotto and fish in a wasabi sauce and Bob seared scallops and fillet of beef with slow cooked Jacob’s ladder. All the dishes were delicious and the service as caring and neglectful as I like it to be! One small quibble is that the cheese board was less than thrilling with the cheese served too cold for my taste.

I should not have worried about the dining room being hushed, we were seated next to a couple from Texas, who with all the charm and lack of awe that Americans can bring, enlivened our evening in an entirely positive way.

I slept so soundly and was so comfortable in the 400 thread count sheets that I didn’t want to get up for breakfast. Of course I did get up as I’ve never been known to miss a meal opportunity and I feasted from the buffet, drank freshly squeezed pomegranate juice and had a small but perfectly formed hot dish of smoked halibut with a poached egg.

A short walk to see the church where the Le Manoir holds it’s magical carol services each December and it was time to head home. At this stage of an article I need to sum up, write a few witty words to round things off but this time all I can write is that is was wonderful a real taste of heaven………

A further review of the room can be found here http://secretsofagoodnightssleep.com 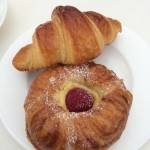 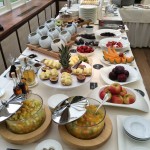 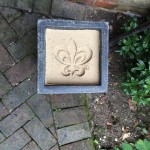 A little Relais and Chateaux mark 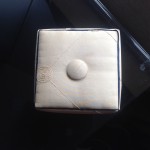 The most beautiful sewing kit Closed 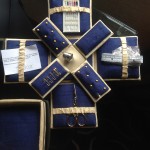 The most beautiful sewing kit open 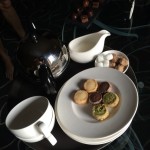 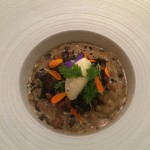 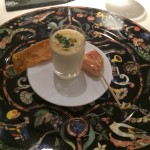 An amuse of scallop and cauliflower 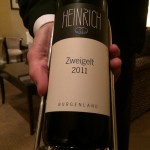 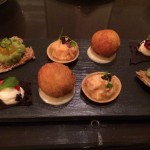 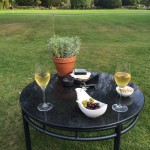 A little fizz in the garden 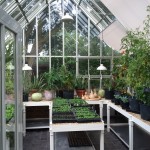 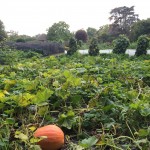 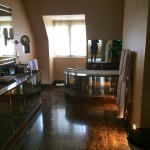 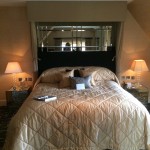 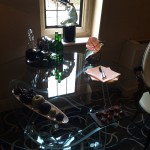 4 thoughts on “Staying at Le Manoir or My Night in Heaven.” 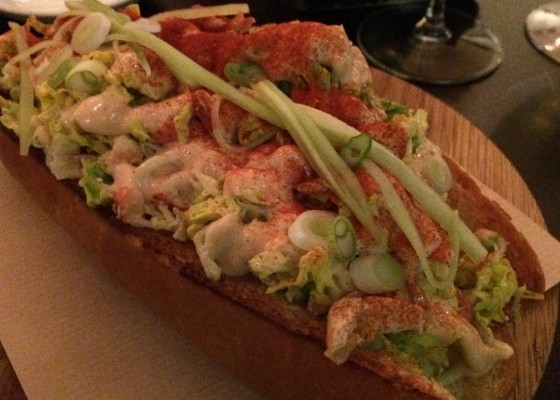 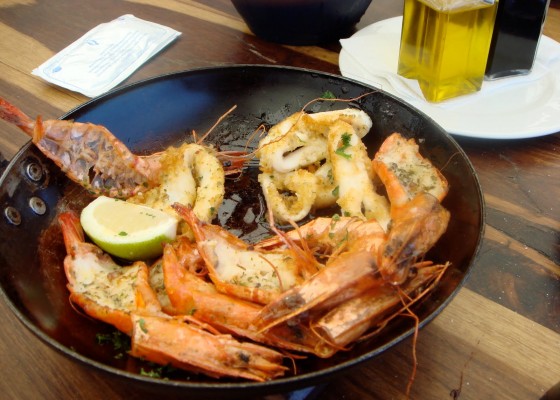 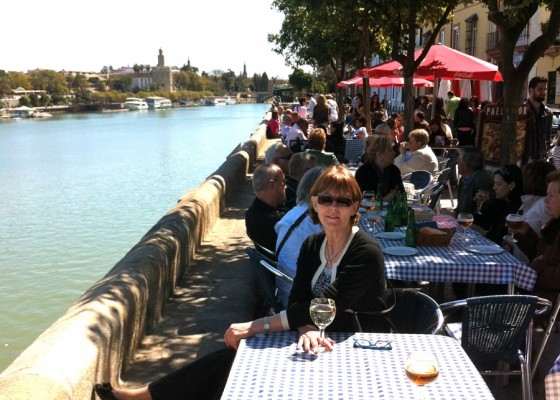